At around 3.30am, the earth’s orbit created the eclipse – directly positioning itself between the sun and the moon.

The moon temporarily turned itself a pale dusky red – this is due to sunlight being reflected and then being projected off of the Earth’s atmosphere and onto the moon’s surface.

Alongside the eclipse, last night’s moon was also a super moon.

This happens when the moon is at its closest point towards the earth, meaning it seems larger than usual.

For the next hour-and-a-half, the sun that reached earth was a red shade, as it had to pass through the Earth’s atmosphere.

While here in Europe, skies were cloudy and the eclipse was only visible for a short amount of time, the Americas got a clear view of the spectacle and were able to enjoy the event.

NASA live-streamed the event from the Griffith Observatory in Los Angeles on YouTube, so if you’re curious about it and or want to rewatch it, it’s still available now.

The eclipse of May 2022 was visible in parts of the Americas, Antarctica, Europe, Africa, The East Pacific, New Zealand, Eastern Europe, and the Middle East.

Lunar eclipse in Scorpio is bringing major energetic release. This transformative period is allowing us to purge all our overwhelming emotional baggage and rewriting our life with clean slate and clarity. 🤍

The next eclipse will be a partial eclipse and will be seen on October 28, 2022, so make sure you make a note in your calendar and remember the date. 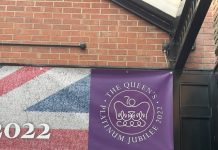 Football on this day – May 16th