Derby County’s 1-0 defeat at home to Cardiff City on Saturday marked the end of the 2021-22 season that saw the Rams relegated to the third tier of English football for the first time since 1985-86.

A defiant mood was present when Derby were relegated even after losing 1-0 to QPR after a 88th minute winner from former Spurs player, Luke Amos,

Phazon Uk on Reddit said: “Can’t fault the players. Can’t fault Rooney. Can’t fault anyone really. Despite the outcome it’s been a fantastic season. Love this team, and I’ll be there week in, week out next season.”

This sense of pride was shared throughout most of the online community as many believed before the season even started that Derby had little chance of staying up due to the points deduction.

The players and staff at Derby County should hold their heads up proudly for their efforts this season.

They would have finished comfortably outside the relegation zone without the points deduction, I hope they get promoted from League One in their first attempt… #Dcfc ⚽️ pic.twitter.com/nzXSWfuLkF

An initial 12-point deduction was increased to 21 points as Derby were found guilty of breaching EFL accounting rules.

Even with the current uncertainty surrounding the ownership structure of the club, fans are positive the Rams, under the guidance of former England captain Wayne Rooney, will return to the Championship.

Andrew Dean on Twitter said: “We’ll be back in a years time, fresh start and better times ahead, quality effort from the kids.”

Derby County will start next season in the EFL League One which will begin on the 30 July. 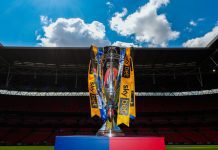