A team full of history and legacy face the prospect of being relegated to the third division for the first time since 1984.

The Rams find themselves dangerously close to the dreaded drop coming into the final 20/21 Championship game week.

The Owls were docked 12 points at the start of the season for a breach of financial regulations. Whilst the punishment was eventually halved to six, Wednesday have never been able to fully recover and find themselves three points behind the Rams ahead of their fixture at Pride Park on Saturday.

Sitting in between these former giants and also on 40 points are Rotherham. Crucially though, The Millers have a game-in-hand on both Derby and Sheff Wednesday which will be played later tonight against Luton Town.

A win for the Yorkshire side would lift them out of the relegation at the expense of Derby thanks to Rotherham’s superior goal difference. A draw would leave them in 22nd with an advantage heading into the final game weekend. A loss against Luton will make it a nail-biting 90 mins on Saturday for the clubs.

Despite numerous chances to secure Championship status, Derby, who have the second-worst goal difference in the division, remain in serious trouble going into their last game of the season this coming weekend.

After the sacking of Philip Cocu in November, with the club sitting rock bottom, the board at Derby appointed Wayne Rooney firstly as interim coach and then on a permanent managerial contract. It was hoped the Englishman, who left DC United for the Midlands club in 2020, would steer the club to a comfortable mid-table finish following their horrendous start.

Their long-term project though will be thrown into serious turmoil if they drop down a division. It was hoped that former Manchester United legend would guide the club back into the Premier League for the first time since 2008. Instead, they face the possibility of being dragged down to League 1.

Despite reaching the play-off spots four times in the past six seasons, this year, the club have been architects of their own downfall. Starting with the controversial appointment of Rooney a year earlier, this season the Rams have had defensive problems throughout but have been extremely poor in front of goal. Colin Kazim-Richards leads the clubs’ goal-scoring charts with a measly eight goals in thirty-seven appearances. Next on the list, defensive-minded Scotsman Graeme Shinnie with just three!

Some may argue that Derby would make an instant return to the 2nd level of the elite English footballing pyramid if they were demoted. But just ask the likes of Wigan, Charlton, Sunderland, Ipswich and Portsmouth, clubs with huge statuses who have all failed to negotiate themselves out of the labyrinth that is League 1.

It’s going to be a thrilling finale to this seasons Championship, will Derby hang onto their 2nd division status by the skin of their teeth, or will Rotherham pinch that final spot league spot, or will Sheffield Wednesday with the crazy season they’ve had provide the knockout punch? 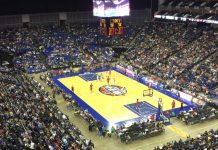