Matlock’s Victorian Christmas Market attracted thousands over the weekend despite fears of cancellation after recent flooding and extreme weather.

There had been concerns that the recent weather in the town would affect the annual Matlock Victorian Christmas Market’s 25th anniversary.

It was only last week that Matlock Town Council confirmed the event would be going ahead as planned.

Matlock council’s statement said that contingency plans organised by Derbyshire Dales District Council, who manage the market’s venue of Hall Leys Park, had resulted in the event continuing as normal.

Stall Holder, Ernie Earnshaw, who spends the ten months before Christmas making wooden ornaments in Poland and selling them over November and December, says he was impressed by the council’s action.

The 57-year-old who runs the Rustic Rudolph business said: ” It’s very good and in my opinion very well organised. There were a lot of difficulties with unloading the vans, but that was because of access restrictions as they couldn’t damage the park. We were well met by the council to be honest, who kept us updated and did well getting all this ready on time.”

The Hall Leys Park where the market is usually hosted, was submerged under several feet of water in the recent floods on the 8th of November.

The flood was the worst in Matlock for over 20 years, with the area usually occupied by the market being especially affected due to its proximity to the River Derwent.

However through the considerable effort of the local council , the park was back to normal just in time for the start of the Market, along with the influx of visitors travelling in for the event.

Hall Leys Park has recovered from recent flooding
1 of 4

The 61-year-old from near Manchester said: “In terms of the flooding, I honestly haven’t had much experience with it apart from what I saw on the TV and heard on radio. So I’d say they’ve done a good job. It’s just been like any other show, as far as I’m concerned it was just another show. Queuing up with the rest, unloading with the rest and then packing up with the rest. You just have to be a bit patient and take your time with it.”

Thousands visited over the weekend to see what the market’s over 200 stalls had to offer.

Housed in three large and heated marquees, there was a large variety of crafted Christmas gifts, with one of the marquees being dedicated to seasonal foods.

Stefan Dyson from Chesterfield has been to the Matlock Victorian Christmas Market for the last six years. For him personally if the event had been cancelled, it would have been a big loss for his family in the build up to Christmas.

The 44-year-old said: “I’d definitely have missed it if it wasn’t here. It’s one of the things that my family really like to come to. It’s part of the build up to Christmas for us, my kids like to come and buy a Christmas decoration or a jumper for the dogs. It really wouldn’t be the same if we had to go elsewhere, it’s our little tradition.”

The second day of the Matlock Victorian Christmas Market was also the site of an Extinction Rebellion environmental protest, read more here: https://wp.me/p9zqjJ-8mq 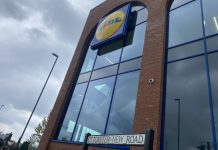