It’s been an action-packed first day of this year’s Ashbourne Royal Shrovetide – with thousands of people descending on the town to get involved.

Every year, Shrovetide draws in the crowds as the Up’ards and Down’ards compete for glory by attempting to goal the ball over the two-day event.

It did not take long for the ball to disappear from view after the turn-up took place at the stone plinth in the town’s Shaw Croft car park.

And, after six hours of epic action and stop-start play, there was a goal by Tom Leighton for the Up’ards at Sturston Mill to give them the advantage heading into day two.

Here were our five key moments from the action:

This great video, by University of Derby journalism student Dave Layzell, shows the moment the ball was turned up and Shrovetide 2020 began.

At just after 2pm, Andrew Lemon started the historic game by turning up the ball from the brick plinth in the town’s Shaw Croft Car Park.

Thousands of people – split into two teams, the Up’ards and Down’ards – had gathered for the event, which last year was won 1-0 by the Down’ards.

2. Getting into the thick of it

From climbing up trees to plunging into muddy water, the Up’ards and the Down’ards quickly got into the action.

There was stop-start play throughout the day but the Up’ards seemed to be in the ascendancy thoughout – working hard to edge the ball ever closer to the goal in Sturston Mill.

It would be many hours later before they scored but, as this photo shows, all players were doing what they could to get the best advantage for their team.

For the third year running, the journalism students at the University of Derby headed to Ashbourne to cover Shrovetide.

They created a pop-up newsroom in the town where they were able to cover the event live.

Students were also based at the Markeaton Street campus to collate the stories, photographs and videos of the historic game and put them on Storyhub.

It’s fair to say some of them were surprised by the ‘absolute madness’ of the event – while BBC Radio Derby has compiled some of their footage for the station’s Facebook page here, above.

4. The Up’ards take the advantage with the first goal

It was a long time in coming – and it was no surprise when it happened – but it was advantage Up’ards as Tom Leighton goaled the ball at Sturston Mill at about 8.15pm. The video, above, from Taylor Umland shows the key moment.

Speaking about the build-up to the goal, reporter Alex Canner said: “The key Up’ards players had a separate hug to decide who would score – and that actually took about 20 minutes.

“We then heard singing and cries – the mood was really cheerful, there was lots of celebrating and noise. There was a festival atmosphere even though it was freezing cold.

“There were a few cries to the journalists and spectators to turn their lights (torches) off, as the players decided in private who would score. Then there were huge, tribal cries as soon the goal happened.”

5. The celebration in the Greenman pub

This video, by University of Derby student Liz Ford, shows the moment that Tom Leighton was carried into the Greenman pub after scoring his crucial goal.

He said: “This is everyone’s massive effort – it’s been a huge effort from everyone, and I’m just lucky that my name came out of the draw.

“There’s a number of lads in the draw at the end and I was fortunate enough to score.

“I can’t even explain what it’s like – just an unbelievable feeling. When you’re a couple of fields out, you start thinking: ‘We’ve got it’, you think it’s going to go all the way now but you’re never quite sure until it’s done.” 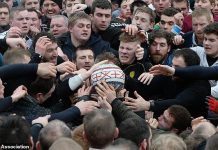 Will Shrovetide Football ever be banned?

Everything you need to know about Ashbourne’s historic Shrovetide game

Blog: How to survive Shrovetide and enjoy it