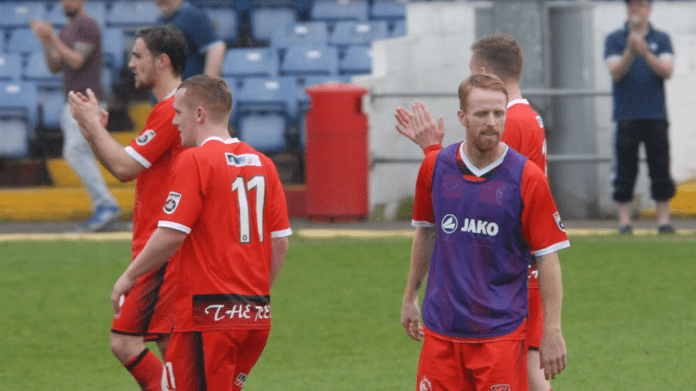 The Reds reached the final following a dramatic 4-2 win away to rivals Matlock Town, with Mickleover Sports awaiting them in the final.

Shiels said he was excited by the prospect of playing on such a huge stage but feels his side will not be affected by the Pride Park setting.

He said: “I haven’t had the pleasure of playing at Pride Park yet, so it will be a great experience, especially being a local lad.

“Playing in a big stadium is great but I don’t think it will make any difference to the game or the players’ nerves.

“A lot of our guys have played in the football league before, so I think it’s a setting they will be used to despite not playing there on a weekly basis now.”

Derbyshire FA announced that the final would take place at the home of the Rams on Friday.

They said: “We are delighted to announce that the Derbyshire Senior Challenge Cup final will be held at Pride Park.

“The final will take place on April 24, with Mickleover Sports designated as the home side.”

Alfreton seem to have gathered real momentum ahead of the final, winning four games in a row in the National League North to propel them to 11th in the table.

Shiels said he was happy with the way that his side have been performing of late but is hopeful that they can claim some silverware this year.

He said: “Morale is high at the moment and hopefully we can carry this forward into the end of the season.

“The competition is massive for the players and the club as it’s likely to be the only bit of silverware we get this season.

“Mickleover are a very good team with some great individuals but, if we prepare right and stick to our game plan, then we should have too much for them.”

Chairman Wayne Bradley said he was excited for his side to right the wrongs of last season, as well as to see them play at Pride Park.

Bradley said: “Obviously last season was disappointing to lose, especially on our own turf, but we put in a good performance against a good side but just couldn’t get the ball over the line.

“I’d love to make it right this year, we’ve got a better side this year and, despite not having the home advantage that we did last season, I feel more confident.

“I’ve never seen the lads play at a stadium the size of Pride Park before, so it will be a great experience but it will only be one to remember if we win.”