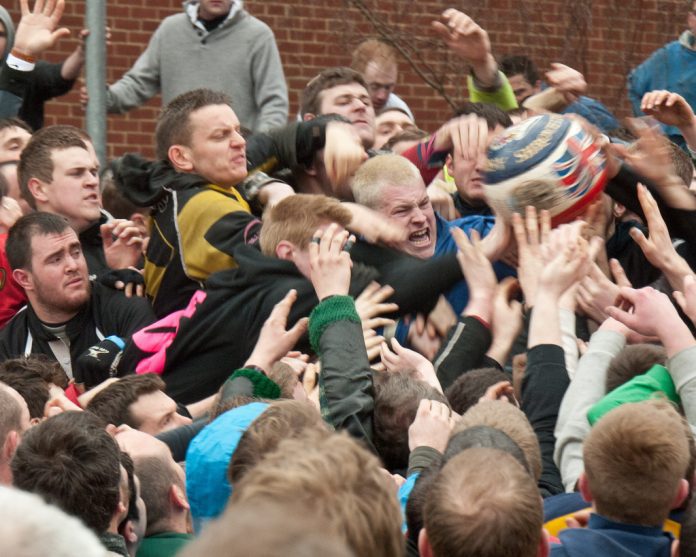 If you are born north or south of the River Henmore in Ashbourne, Royal Shrovetide Football is in your blood.

But, if you think you know all there is to know about the historic game, think again.

Local historian, Trilby Shaw, has been sharing the little-known facts all loyal Shrovetiders should know…

It is thought the game originated during Roman times when, instead of fighting over a ball, competitors would battle it out over a decapitated head!

Historically, it was played on Shrove Tuesday because it gave men one last chance to play before Lent began and they had to give it up for 40 days.

Shrovetide was played in Church yards until  1192 when the King intervened.

Trilby said: “The king had walls put around Church yards to stop people playing football and holding markets there, so they had to come out onto the streets which they still do.”

Ashbourne is the only place where mass street football is still played.

Shrovetide is renowned as a game with only one rule – no murder – but actually it has many rules and several unwritten ones such as no dogs on leads.

Trilby said: “My aunt, Mrs Mugglestone, payed for men and boys to play that ball for her so she could be at the goal and goal it, just to prove a point.”

In the 1800s businessman, Francis Wright, attempted to stop the game for the first time.

Two men have drowned during Shrovetide.

One man drowned at Clifton Mill in the 1800s and another drowned in Mayfield.

To discover more about Shrovetide’s surprising past, click on the video below.