Every available surface is filled with bodies, some sitting, some standing.

There are people on steps, walls and bridges. People who, strangers only moments ago, stand united, exchanging easy smiles and laughter, bonded suddenly and irreversibly.

The crowds are ready, waiting with almost palpable anticipation as the energy builds, as the time gets closer.

As you look around, trying to take in and memorise everything about the scene before you, you are swept up in the emotion, the feeling, the certainty that in that moment you are a part of something special.

Suddenly, silence falls. The show is about to begin. As water surges in a riot of colour and spectacle from the fountain in front of me, the crowd gasp. Everyone is transfixed.

I was as though I was at a festival – standing in a muddy field, wellies, denim shorts and glitter, waiting excitedly among the crushing wave of fans, super-fans and self-declared biggest fans for the main act to take to the stage. I’m not. I am standing in front of Barcelona’s Magic Fountain of Montjuic, watching with ever-increasing awe and unfettered childish delight as the display of water, light, colour and music majestically unfolds. That’s the thing about Barcelona, it has a way of capturing your imagination and teasing your senses until you can almost convince yourself you are somewhere else entirely.

Or, sometimes, that you had not even left in the first place. As the plane broke through grey clouds and a damp and drizzly Barcelona Airport provided my first view of the city I had come to explore, I had never felt so at home when arriving in a foreign country as I did in that moment. Reconciling this back to front image of a rainy Barcelona with the sunny England I had left behind however, was a little harder to get my head around.

The first thing that struck me about Barcelona was the traffic. The heaving, uninterrupted mass of cars, buses, taxis and motorbikes that drew you away from the pavements of Catalonia’s capital city to the streets of New York almost instantly. Horns blare constantly as motorbikes weave their way confidently, almost arrogantly, past vehicles who are just as assured of their dominance and just as unforgiving to pedestrians who get in their way.

As evening begins the coffee shops, bars and restaurants that fill every corner come alive, making you feel like night is actually just the beginning. The smell of rubbish from the industrial bins scattering the city add a sobering tinge to the warm evening air reminding you that, for just over one and a half million people, this city isn’t the glittering oasis that you imagine in your head but a living, breathing home where the trappings of everyday life are a necessity here just as much as they are anywhere else.

A new day reveals a new city and as I explore the streets of the Gothic Quarter, on one of the district’s many free walking tours. Here, I felt as though I was transported to the dizzying heights of Rio de Janeiro. Before arriving in Barcelona, my only point of reference for its physical make-up was what I had seen on television – the long, expansive nature of one of its most popular and iconic streets, Las Ramblas.

Finding instead so many narrow, cobbled streets, peacefully tucked away in the shadow of their more imposing and domineering neighbours was totally unexpected but completely enchanting. Filled with apartments, shops, bakeries, gelaterias and eateries, the tall, multi-storey buildings which rise up from either side of these slender passageways, so narrow that at times it is possible to rest a sweaty palm on the cool stone of each façade, remind me exactly of depictions of the Brazil I have read about in books. Even if that depiction, thanks to Lucinda Riley and her captivating book The Seven Sisters is of a Rio in the 1920s.

From the base of buildings to their lofty heights, standing on the smooth decking of La Isabella rooftop bar and looking out over the uninterrupted views of Barcelona below, it is easy to let your mind drift off to the hot, arid climate of the Middle East – to feel the sultry heat pressing down on you, to see the almost haze-like ripple convincing you buildings are bouncing gently on the breeze, to taste the dryness in the air, to see stone structures commanding the landscape, and to imagine, if you close your eyes and let these sensations overwhelm you, that you are surrounded by desert.

If it was not for the water droplets trickling slowly into my hand from the glass sides of my Maracuya Martini, the smell of its sugary contents, I could almost believe it to be true. This sense of culture is perhaps unsurprising considering Barcelona’s strong Islamic heritage from the early centuries up until the end of the Middle Ages.

With my feet planted firmly back on the ground, and heading in the direction of Barceloneta Beach, hints of Miami are all around me. Glorious sunshine teases the boats and yachts filling Port Vell Marina, poking and prodding them playfully until they finally give in and proudly reveal their best angle to the stubborn spotlight beaming down on them. Palm trees so eye-rollingly perfect, their lack of originality is almost comical, line the route to the beach, tempting you ever further along until you can resist the pull no longer and surrender to the fun, relaxed, chilled-out atmosphere that wraps itself around you like a blanket as you reach the sand. I almost felt betrayed a sun-kissed roller-skater had not brushed past me on my way.

While these comparisons may be alluring, none of them can take away from the character that is Barcelona itself.

It is a city that can spark your imagination and yet in the same moment endear you to its uniqueness, to the quirky details about itself that leave you smiling with affection.

The way the streets are filled with colour as wet laundry bakes leisurely in the midday sun, the fact that nobody seems to own a dog taller than ankle-height, the way body confidence just exudes from people at the beach (challenging my shy and repressed British sensibilities) and the way balconies, one of the most charming features of Barcelona’s landscape, are filled with the most random and unexpected things, from three industrial sized fans, confusedly facing the street and not the apartment, to bikes, flags and multi-coloured wind spinners.

As the fountain show comes to an end and I reluctantly fall in line with the gentle pace of the crowd slowly filtering out into the night, I reflect upon how little of Barcelona I have seen.

I mainly explored Barcelona’s Gothic Quarter, a modest twenty per cent of this vibrant and contrary city.

As I turn to the right to make my way back to the hotel, I look to the left into the unknown distance before me and make the decision to one day return and discover where else in the world the other eighty percent of Barcelona will take me. 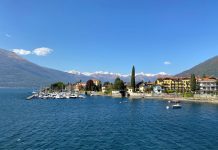