Harriet, who has been designing since her teenage years, just missed out on the top spot at the Midlands Fashion Awards.

Since she heard about the fashion show last year, she has been trying to get her collection ready to enter, and finally managed it this year.

Harriet, aged 34, who lectures at the University of Derby, was delighted that Debra Hepburn, of “Young British Designers” was one of the judges, as she loves her work and wanted to impress her with the development and “vision” of her own collection.

When asked about Harriet at the Midlands Fashion Awards, Debra said: “I met Harriet at the MFA (Midlands Fashion Awards) call-in. She’d just about made it after a long journey to meet with us. It was the end of the day and we’d met so many talented new designers. Harriet only had a few pieces with her yet despite this, her very unique and authentic aesthetic shone through.”

Speaking about Harriet’s collection, Debra added: “For the Midlands Fashion Awards night, Harriet had created a full collection that is fearless, bold and feminine yet imbued with the story of a growing girl.”

She entered a collection composed of all denim, four outfits made out of neutral and black denim.

Talking about the colour scheme for her collection, Harriet said: “All you need is black, my style is minimalistic, and less is more.”

Despite thinking that black is all you need, Harriet said that she felt she couldn’t create an entire collection with one colour, because although she likes wearing all black, she also likes the contrast between shadow and light.

This is what encouraged her to find a lighter denim to accompany her darker one.

Initially, she was on the hunt for a white denim, but came across neutral one from a factory in Ilkeston, Derbyshire, which fits in with her brutalism theme.

Brutalism refers to a style of building where the materials are left “raw”, such as unpolished concrete. Harriet’s inspiration translated into her clothing for this collection, where she would let the material stay in its natural state. Harriet said that she is inspired by brutalist architecture.

As well as this, her inspirations come from her teenage years: she was a tall teenager who often needed her trousers unpicking, and rolling down.

Although she said she hated the look of this at the time, she embraced it into her collection. It can be seen throughout her work, with frayed edges and pressed hems.

Debra Hepburn added: “Much of Harriet’s work is inspired by clothes as living memories. As a strong, tall, very striking young woman, she spoke of how clothes had always held and shown silent cues of being ‘let out’ and ‘hems being unstitched and left longer with the ensuing raw edge.’ This ‘altering’ of her wardrobe had become part of her design DNA and I found it both fascinating and evocative.”

Her collection was created with individuality and function in mind. She said: “I envision my clothes to be worn by everyday people, everyday, I want people to live in these things.”

Beth Reynolds, 19, from Lincoln, who was the model for Harriet’s wrap skirt from her collection, said: “Her work is just lovely, simplistic and beautiful. The skirt I modelled definitely would be something I’d buy myself. It was very flattering, figure hugging, but also comfortable.”

Harriet hasn’t completely disregarded the idea of entering the Midlands Fashion Awards again in 2018, but she is hoping

that by then, her brand will be more established and widely recognised.

Harriet Kjellman: The multi-skilled fashion lecturer who won a top place in the Midlands Fashion Awards

Skirt styles through the last 60 years: Inspired by Harriet Kjellman

How Bristol Rovers achieved their promotion to League One 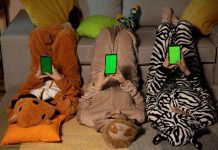 How to plan the perfect #nationalsleepoverday for all ages