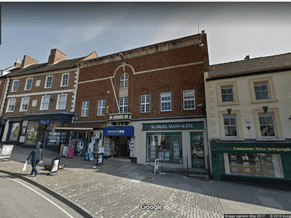 A former cinema in Ashbourne is to be renovated into a multi-function community hall.

The Elite Building in Market Place – which was constructed in 1931 – used to be a social hub for the town although it has been empty for years.

It is now split into a cluster of shops and offices which hides the performance area which was once the top half of the town’s cinema.

Its owner, businessman Michael Gallimore, has been given the go-ahead for the conversion by Derbyshire Dales District Council.

There has been a tug of war for the historic space since the 1980s.

A series of nightclubs have used the space over the decades but there has been little continuity with venues coming and going.

More recently, a bid was made in October 2014 to turn it into a restaurant although this never materialised.

Mr Gallimore plans to bring the building into the 21st century with a modern kitchen, disabled toilets and changing its use from a nightclub venue into a community hall allowing the whole town to benefit from its space.

In a throwback to its former glory, Mr Gallimore has said that the building could also be used to run small cinema screenings.

Similar projects have been run in the town.

The application for the project has now been approved by Derbyshire Dales District Council to proceed with the renovations.

With the planning permission now granted the building is set to once again become an important asset for the town.

This change means the building will soon have several functions such as a wedding venue, a multi-use ballroom or even a space for performing arts.

The shops and offices – which include Trespass, Elite Outdoor, and a hypnotherapy service – will continue to operate at the Elite Building.