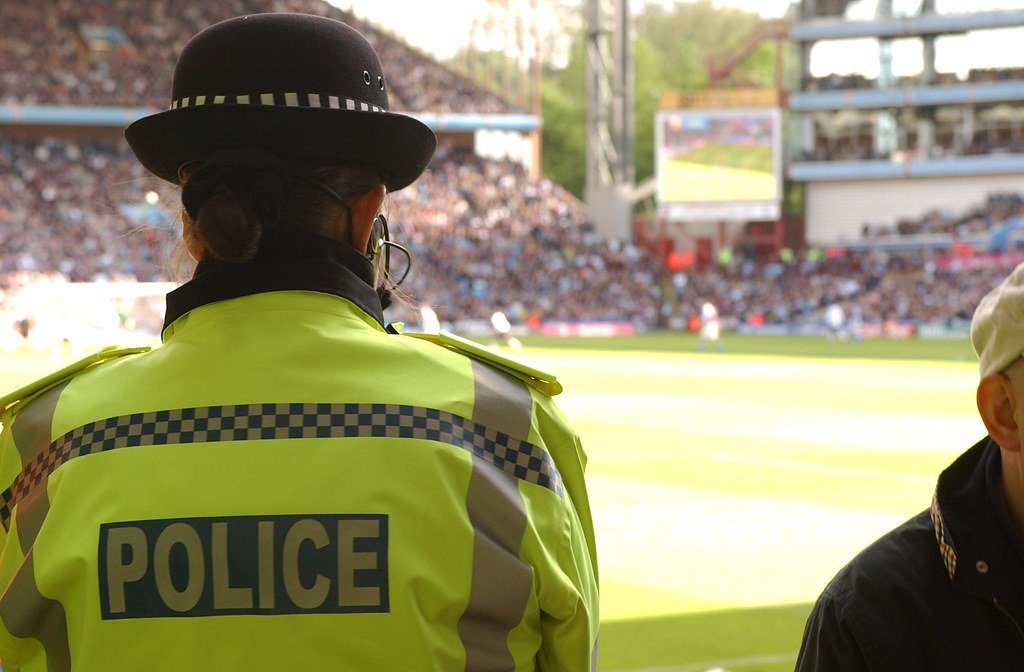 Manchester United’s Premier League game with Liverpool was postponed on Sunday, after a planned protest by the fans, angry about the Glazers’ ownership of the club, outside Old Trafford spilled into chaotic scenes inside the stadium.

The protest started at around 1pm, where supporters gathered outside the ground sporting anti-Glazer banners and chanting against the unpopular American owners.

A group of around 200 fans congregated outside the Lowry hotel in Manchester city centre, where the players stay before matches, surrounding the team bus before police arrived on the scene.

By 2pm, the crowds outside of the iconic stadium had risen to thousands. Half an hour before kick-off, the stadium’s security was breached as protestors piled onto the pitch, causing criminal damage and clashing with the overwhelmed police.

StoryHub Derby talked to two former police officers about their experiences of controlling large groups of supporters in English football.

David Carson joined the Cambridgeshire Constabulary as a spotter in 1984 and worked on football operations across the country gathering information and intelligence on supporters. He remembers an incident with a group of supporters that unfolded in a pub before a match between local rivals Ipswich Town and Cambridge United.

“When I joined, police forces were constantly dealing with football supporters,” he said.

“We knew that a lot of the Cambridge fans were travelling because it was a local derby. We got a tip off that they would be at the railway station and when we arrived standing on the platform was everybody that we knew who had been involved with football over the years, young and old.

“We drove to Ipswich and they went on the train, but we found out later that around 120 fans had managed to lose the police escort and the next thing was that we got a phone call saying they were all in a pub together.

“We decided to go to the pub to try and calm them down. We got to the landlord and said, ‘right, this is what’s going to happen: you’re going to have to close your pub and we need to find an orderly way of getting these fans out.’

“The landlord was a real tough nut himself and said, ‘I’ve run this pub for 25 years and you don’t tell me what to do – I’ll be fine’. I thought he was mad!

“Within ten minutes, two tear gas canisters went off in the pub and every window in the pub smashed from the inside out. The tear gas had gone off and everyone inside was now exiting the pub through the windows.

“There were loads of them. It wasn’t just Cambridge fans in there either – it was Ipswich fans as well and they were fighting everywhere.

“We were outside the pub and got cornered with two other spotters. There was a whole pack of them coming towards us – about 80 of them! They came towards us shouting and hurling abuse and got within about 20 or 30 yards from us and just stopped. Suddenly, their faces drained.

“I thought we must look tough because they’re actually quite scared of us. Suddenly, they all turned around and started running – I thought I must be the hardest bloke that there has ever been!

“I looked over my shoulder and there were six horses from the Met Police that had been sent up and were now charging at the group of fans. They ran past me so close that one of the horse’s tails hit my hat.”

Mel Dobbs was a football intelligence officer for the British Transport Police. He remembers an incident involving West Ham fans after the League Cup quarter final in 1982.

“One of the biggest outnumbered events we ever had was West Ham coming to Norwich,” he said. “They had been drinking in a pub before and after the game.

“When we got on the train, the West Ham fans were playing-up big time. There were seven of us – a sergeant and six officers – and we had to take the train from Norwich as far as Ipswich, because they had to get off the train there to transfer to a local service to Colchester.

“I remember getting on this train and getting constant abuse the entire journey. We knew they had to get off at Ipswich, so we called Ipswich police in advance because they were causing some serious trouble.

“The fans had more or less stripped the pub of all its paintings, pictures, mirrors – you name it. They all blatantly had them under their arms and seats on the train, which they had stolen from the pub.

“When we got to Ipswich station, they had got every on-duty police officer in the whole of Suffolk on the platforms at Ipswich station. We unloaded all the fans and lots of them left the stolen items on the train – but we had identified the ones we wanted to arrest, so we went along the platform and picked them out and handed them over to a Suffolk bobby.

“We arrested about 18 of them – the prison vans were rocking. Every single one of them put their hands up to what they were charged with.

“When we went back to the pub the following day, with all the pictures and mirrors, we could see on the walls where the missing frames were. You could see where they went because of the colour difference on the walls, and we replaced nearly every single item.”