Derby County Ladies set a new club record on Sunday as they hosted over 2,000 supporters for a fiercely contested East Midlands derby. The game was held at Derby County’s Pride Park Stadium and Nottingham Forest were the victors thanks to a late Precious Hamilton goal.

The game set a new record for Derby County Ladies breaking the existing record of 1,642 which was set a year earlier, also against Forest at Pride Park. The new record is an incredible 2,318.

For context, the highest average attendance in the WSL the previous season was Chelsea who managed 1,864, a whole two leagues above.

The derby was the Ewe Rams’ second defeat of the season thanks to Hamilton’s 83rd minute header. Derby battled well having been reduced to ten players after Sherry McCue was sent off in the 65th minute.

Sam Griffiths’ side had won their last three games in all competitions since defeat on the opening day at Burnley. Scoring 19 goals in the process and conceding just twice. But they drew a blank in this one as the Reds took all three points back down Brian Clough Way.

Who do you think will finish higher in the FAWNL North?

The weekend saw records smashed in the Women’s Super League with 32,000 people in the Etihad Stadium watching the first ever Manchester Derby. Manchester City won 1-0 over WSL newcomers Manchester United.

This was over five times the previous record for a woman’s match; 5,200 turned out to see Arsenal crowned WSL champions last season.

Women’s Super League: How much have big stadiums helped clubs? 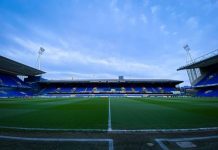