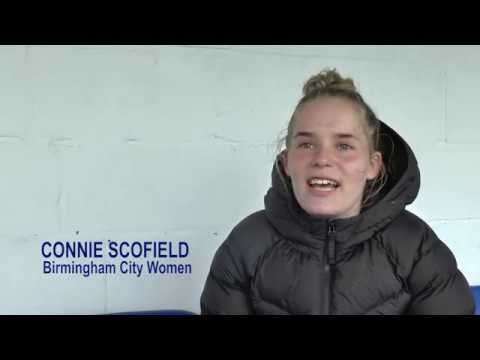 Birmingham City Women, away from home and 1-0 up against Liverpool Women, broke through in the middle of the park as Lucy Staniforth played in 20-year-old Connie Scofield. The midfielder looked up with composure and cooly curled a left-footed shot around the despairing Anke Press to double the side’s advantage.

As the young star celebrated in delight surrounded by her team-mates after scoring her first senior goal for Birmingham City, one look at the elated manager Marc Skinner mirrored that on the pitch.

Having been at the club since she was just 10 years old, Scofield’s progression had been watched by Skinner in his role as head of the Blues’ Regional Talent Club (RTC).

He said: “The pride I feel for a Birmingham baby to come through and perform like that is enormous. She played well against Arsenal, but it was a different game. But for her, I knew she’d find those spaces today and she’s coming on leaps and bounds.

“When that goal went I had a moment to consider how far she’d come and that’s a great sign for all of the girls in our RTC.”

Congratulations to @connie_scofield for your 1st senior goal. If there was ever a shining light for younger players in our @BCFCRTC then this is her. Positive results are great! But watching the growth of a person is life enhancing. Keep it up Kidda 💙 @BCFCwomen pic.twitter.com/ZjXtY5MSvg

What is the Regional Talent Club?

The RTC player pathway is designed to help identify female players of outstanding ability and is the only FA-recognised Tier One licensed talent centre in the West Midlands.

The club takes part in a local and national fixture programme and the FA Youth provides players with a comprehensive training programme across all areas of the game.

The RTC has produced six former and current first-team players, among them England internationals.

Longest-serving player and captain Kerys Harrop is now the second most capped player in the FA Women’s Super League, and came through the club’s RTC.

She said: “At the very beginning I was under the captaincy of Laura Bassett, who was a role model for me. She nurtured me into the player that I am today and hopefully I’m doing the same to some of the girls we have here by demonstrating captain abilities not just on the pitch, but off it too.

“Every time I pull on the captain’s armband, it’s a proud moment for me.

“Being full-time professionals makes all the difference because we can get on the pitch a lot more and have more access to facilities that are a lot better quality. We can come in for analysis and play more as a team, which is starting to show now in our performances especially this year.”

Former Blue and local girl Karen Carney, who now plays for Chelsea, went on to become the first female player to be inducted into the Blues Hall of Fame and has notched more than 100 senior England appearances.

While the current crop of youngsters have broken into the first team. Strikers Charlie Wellings, England Under-20’s World Cup bronze medal winner, and Shania Hayles have made their mark in the senior team.

And Scofield signed her first professional contract this season, before scoring her first senior goal in a 2-0 win over Liverpool. Here she explains her journey through to top and how she now juggles studying at university with first team training.

WATCH: Connie Scofield on Life at the RTC

Hannah Hampton, although not starting her journey in Birmingham, graduated from the RTC and is now cementing herself as number one goalkeeper for the women’s team.

The 18-year-old started her footballing journey when she was five years old kicking a ball around in a playground in Spain, before gracing paths with David Beckham’s son and working her way through the ranks at Villarreal and Stoke City.

She joined Birmingham City’s RTC when she was 16 after Stoke City RTC lost their FA Tier One status – a highly regarded accolade for an academy in the UK.

Hampton said: “When Stoke lost their Tier One status, Marc [Skinner – former RTC and first team manager] called me. He said, ‘We’re interested in having you at Birmingham,’ when he was head of the RTC and he told me I had an automatic spot if I wanted it.

“I didn’t take it straight away, it took a while for me to accept the offer but then I eventually came to Birmingham and I think I only played one game for the Under-16’s, one for the development team and then straight into the first team.

“I was in the RTC but I was never around because I was away with England at the Euros and different competitions, matches hence the reason why I only played one game for each team.

“Soon after I came back from an England camp, Marc brought me into the first team. I was grateful to Marc for taking me in so young – I’d just turned 16.”